The University of Delaware opened the season up with a 31-13 win over Delaware State University at Delaware Stadium on Thursday. The Blue Hens now have won nine straight games in this first state match up.

Kehoe went 18 for 28 with 186 passing yards and two touchdowns. The Blue Hens quarterback, also had 30 rushing yards and one rushing touchdown.

Pitts had six receptions for 81 receiving yards and a touchdown.

Tyler had three receptions for 32 yards and one touchdown.

Whitehead was the co-leader in total tackles for the Hens with seven.

Henley was the other leader in total tackles for the Hens with seven.

McGowan had one tackle and one sack in the game.

Defense Name of The Game In First Quarter

In the first quarter, the defense of both teams came to play as neither DSU or Delaware’s offense could get anything consistent going.

The first scoring action of the game came around the 4:54 minute mark when senior kicker Jake Roth hit a 38 yard field goal to give the Hens a 3-0 lead.

Roth for 3⃣ and we have our first points of 2019!#BlueHens#BleedBlue302 pic.twitter.com/IxIzUBktG8

The big play on the scoring drive came when Thyrick Pitts caught a 17 yard pass from quarterback Pat Kehoe to get to DSU’s 30 yard line.

The next scoring drive came from DSU with 18 seconds left in the quarter, as Hornets sophomore kicker Jose Romo-Martinez hit a 25 yard field goal attempt to tie the game up at three.

The play that set up the field goal came from DSU’s junior quarterback  Shayne Smith who found junior wide receiver Kwannah Kollie for 28 yards to get to Blue Hens 13 yard line.

In the second quarter, Delaware started to get some breathing room as the team scored two touchdowns in the quarter.

Before any UD touchdowns happened though, DSU had their own scoring drive as Jose Romo-Martinez hit a 30 yard field goal to give his team a 6-3 lead with 7:41 left in the half.

The critical play that set up the field goal for DSU was when Shayne Smith found senior wide receiver  Jordan Hannah for 39 yards to get to the Hens 20 yard line.

Delaware would score the first touchdown of the game when Pat Kehoe would show off his wheels when he rushed for 21 yards for a touchdown which gave Hens a 10-6 lead.

On the scoring drive, Kehoe made another nice play when he found sophomore tight end Bryce De Maille for 18 yards.

Also, DSU helped Delaware on this scoring drive by racking up 20 yards in penalties.

Near the two minute mark, Delaware would strike again when Kehoe found Owen Tyler for the 24 yard touchdown to give their team a 16-6 lead.

Hens Continue To Pour On The Points In Third Quarter

The first scoring drive for the Hens came at the 10:36 minute mark when Jake Roth hit a 33 yard field goal to give his team a 19-6 lead.

The key play on this scoring drive came from redshirt junior running back DeJoun Lee who had a 34 yard run which put Delaware at the DSU’s 41 yard line.

The next score for the Hens would come when Pat Kehoe found Thyrick Pitts for a 14 yard touchdown to give their team a 25-6 lead with 3:27 left in the third quarter.

Kehoe had 22 combined yards before the passing touchdown, as he ran for 11 yards and hit Pitts for a 11 yard pass earlier on in the drive.

Delaware Scores Another TD In Fourth To Seal Win

Delaware would add six more points to their lead in the fourth quarter but this time it came from a special teams play.

The scoring drive for Delaware came when redshirt senior defensive back Brian Dennis blocked DSU’s senior punter Fidel Romo-Martinez punt which Dennis took it back 14 yards for a touchdown to give Hens a 31-6 lead with 10:56 left in the game.

Delaware State scored their first touchdown of the season at the 3:20 minute mark when freshman quarterback Tylik Bethea found freshman wide receiver Bizzet Woodley for the 10 yard touchdown to cut the lead to 31-13.

Delaware would milk the clock which would seal the 31-13 opening season win over the Hornets.

Hens go on the road to take on Rhode Island on September 7th at 3 PM ET.

Pat Kehoe: Went 18 for 28 with 186 passing yards and two touchdowns. The Blue Hens quarterback, also had 30 rushing yards and one rushing touchdown. 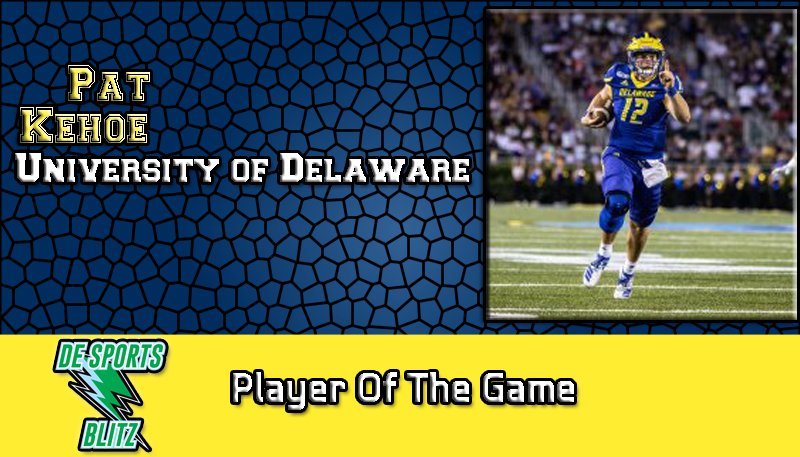