After a tough lost at home last week vs top ranked James Madison,University of Delaware was looking for a bounce back win on the road vs fellow Colonial Athletic Association member and FCS #23 ranked Stony Brook.

The Blue Hens certainly did that with scoring 17 unanswered points in the second half in the 24-20 come from behind win vs Stony Brook. The Blue Hens were down 20-7 at the half and without some of their top defensive players including CB Justin Watson, LB Charles Bell, and DE Cam Kitchen who are all out for the season with injuries.

In the first half, Delaware looked flat and it showed with their two first opening drives resulting in punts.

While Stony Brook came out in the first half with the offense fast by scoring a touchdown on 2 out of their first three drives in the game. On their first drive while their rushing attack led them to the goal, it quarterback Joe Carbone found his favorite wide receiver of the day Ray Bolden for the 4 yard touchdown to put Stony Brook up 7-0 with 8:35 in the first quarter.

Then it was Blue Hen time, the Hens were driving late in the first quarter with running back Kareem Williams doing most of the work as he rushed for 46 yards.  Then as the second quarter began the Hens continued to drive, when quarterback J.P. Caruso found wide receiver Jamie Jarmon for the 23 yard touchdown to tie the game 7-7 with 12:37 left.

Stony Brook answered right back and it was all about quarterback  Joe Carbone’s connection with wide receiver Ray Bolden that marched Stony Brook 48 yards down the field. That connection led to running back Jordan Gowins 6 yard touchdown which put Stony Brook up 14-7 with 10:35 left in the first half.

As the first half was winding down, Stony Brook scored again. This time the highlight play on Stony Brook’s drive was running back Stacey Bedell 34 yard run.  Carbone-Bolden connection was on again with the wide receiver catching his quarterback throw for the 17 yard score.  Stony Brook’s extra point was blocked by Hens linebacker Troy Reeder which made the score 20-7 in Stony Brooks favor with 1:38 left in the half.

It might of been all Stony Brook in the first half but in second half it was the opposite. The Blue Hens defense stood strong in the second half and the offense came out firing as well. 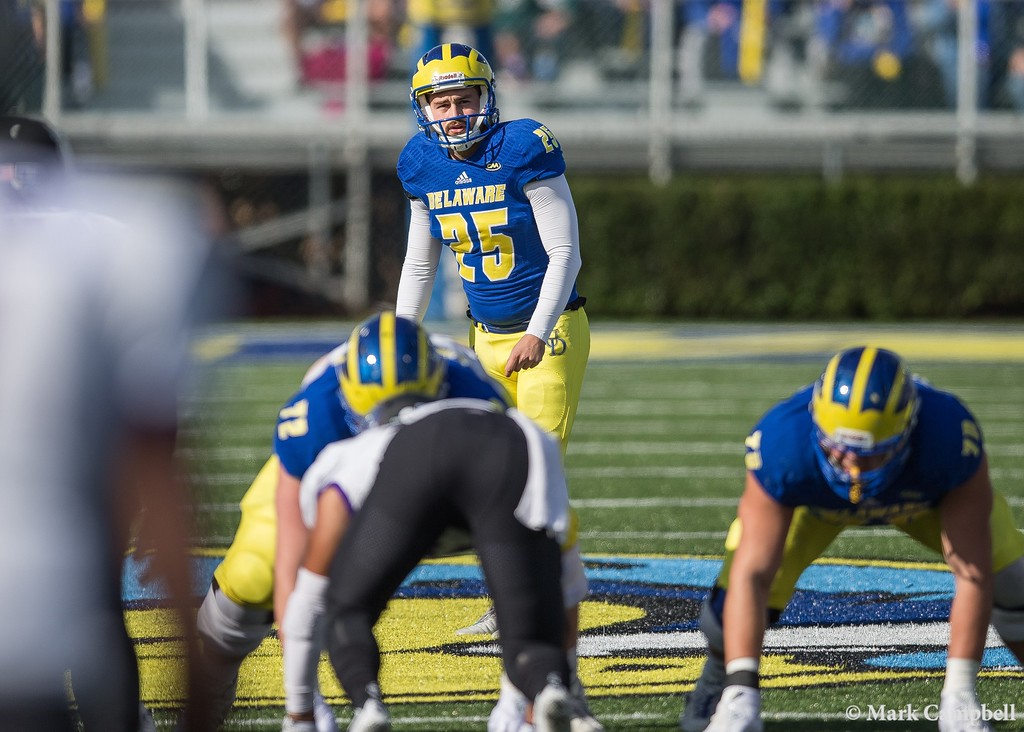 Delaware’s first drive of the 2nd half led to Kicker Frank Raggo’s 50 yard field goal. The highlight of this drive quarterback J.P. Caruso 24 yard run. With Raggo’s field goal that put the Hens within 10 points of Stony Brook with the scoring being 20-10 with 8:47 left in the 3rd quarter.

Raggo is getting used to kicking 50 yard plus field goals, last week he broke a school record making a 55 yard field goal vs James Madison.

Then around the 4:00 minute mark, Delaware’s defense wanted to get into the scoring action. The play started with Stony Brook’s running back Donald Liotine rushing the ball but then he met Hens lineback Troy Reeder who forced Liotine to fumble the ball. The ball was picked up by Hens defensive back Malcolm Brown who took it 45 yards for the score to put Hens within 3 points with the score being 20-17 with 4:04 left in the 3rd quarter.

Well in the early 4th quarter, that is when the Hens comeback became complete with them scoring the go ahead touchdown against Stony Brook. This drive was all about running back Kani Kane who had a 32 yard run and scored with a 6 yard rush for the touchdown that put the Hens up 24-20 with 13:03 left in the game.

The Blue Hens defense was able to close this game out with a sack of Stony Brook’s quarterback Carbone with seconds left in the game.

An interesting note for you, Hens QB Joe Walker left the game in the 1st quarter but  before he left became the 18th Blue Hen to go over 3,000 career total offense yards.

The leading wide receiver of day was Diante Cherry who 3 receptions for 37 yards. WR Jamie Jarmon had 1 reception for 23 yards and a TD.

For the Blue Hens rushing attack, RB Kareem Williams led the day with 16 carries for 75 yards on the day. RB Kani Kane had 7 carries for 57 yards and 1 TD on the day.

On the defensive side, the team had 78 total tackles, 1 sack, 1 forced fumble and 1 fumble recovery for a TD.

“This is a game that was hard to process. We didn’t play well offensively but we played a really good football team and we were very much in the game well into the fourth quarter. We played hard and fought to the end and we had a few moments today when we had the momentum and thought we might be able to push through but it never happened. Hats off to James Madison. They find ways to win games and they didn’t waver and stuck to who they are today. No doubt the fumble recovery for the touchdown was the biggest play of the football game.”

QB J.P. Caruso on the Hens Win vs Stony Brook

“I have so many emotions running through my head. I am so proud of this team, so proud of these coaches for believing in me. It’s a nice feeling. We have a long way to go and we know that. We have to go to practice tomorrow and fix up our mistakes because we have a long road ahead. The ball hasn’t been bouncing our way out and little things have made us lose games. We have been fixing those and we probably had our best week of practice this week. We knew this was the biggest game we had so far and everyone came together and said ‘lets start winning some games.”

“The special thing about this team, this defense in particular, is that we didn’t give up and we came away with the win. We preach every day that we have to stay together and keep playing. A win like this is pivotal for this team and hopefully we can use this as momentum to spark us for the rest of the year.”