Dorsey’s exit was a surprise to Chiefs fans and the football world in general because with help of Andy Reid they turned a broken Chiefs team into a contender in the few short years he was there. The Chiefs went to the playoff three times and the team went 43-21 in Dorsey’s tender as the GM.

As for the new GM for the Chiefs, Brett Veach is a familiar name to Chiefs fans because before being promoted to GM, he was the Chiefs Chiefs Co-Director of Player Personnel. Veach originally joined the club in 2013 as the Pro and College Personnel Analyst. This will be Veach’s 11th year in the NFL and the newest Chiefs GM spent 6 of the 11 years with Andy Reid in Philadelphia with the Eagles.

The Chiefs officially announced Veach as the new GM for the team on July 10th.

The 39 year old Veach will become the 7th GM in the team’s history.

Chiefs CEO Clark Hunt said this about Veach’s hiring in a official statement on July 10th.

“After a comprehensive search process, I am pleased to announce that we have hired Brett Veach to serve as the next General Manager of the Kansas City Chiefs,” Chairman and CEO Clark Hunt said. “Brett has a sharp football mind, a tremendous work ethic and a keen eye for finding talent. Over the last four seasons he’s played a critical role in building our football team. I look forward to working with him to continue to build on the strong foundation we have in place.”

The newest GM of the Chiefs had this this statement released on July 10th after officially get handed the keys to the team.

“My family and I would like to extend our gratitude to Clark and the Hunt family for this incredible opportunity,” Veach said. “I am humbled and honored to serve as the General Manager of the Kansas City Chiefs. Over the last four seasons I’ve had the privilege to work alongside Andy Reid, John Dorsey and a great group of coaches and personnel staff. Together, we built a strong foundation of players that have helped us sustain success on the field. I’m looking forward to continuing our progress as we head into 2017.”

So you may be thinking, why is a Chiefs story on College Delaware Sports Blitz?

Well, the newest general manager of the Chiefs Brett Veach has a connection to University of Delaware.

Veach who came to University of Delaware after an excellent high career at Mount Carmel Area High School in Pennsylvania where he was a 2-time all state selection and the 1996 state player of the year award.

The former Blue Hen played multiple positions on offense including wide receiver, running back, and kick returner with his time there at UD.

Veach had quite a career at University of Delaware where he caught 99 passes for 1,470 yards and 12 touchdowns and averaged 22.2 on 70 career kick returns.

Veach helped lead the Hens to a 30-16 record in his four years at the school and led the team in 2000 to a 12-2 season which helped the Hens go to the NCAA FCS national semifinals that year.

The former Hen also collected a lot honors while at Delaware including third team All-Atlantic 10 honors in 2000 and three-time CoSIDA District 2 All-Academic honors which he is only 1 out of 7 Blue Hens to earn CoSiDA Honors.

Also, during his time at the Blue Hens, Veach earned his Bachelors in health and physical education and his Masters in education.

Here is a fun fact, one of Brett Veach’s quarterbacks at his time with Delaware was Matt Nagy who is now the Chiefs co-offensive coordinator.

After his college career was over, Veach went continued his time at Delaware, just off the field.

Veach worked in the Athletic Department at the school and was a graduate assistant for a while under Jerry Oravitz the former director of Football Operations and a mentor to Veach could tell the future was bright for the young man.

“When he worked with us back then, he was a young, seasoned veteran and his intelligence was uncanny,” Oravitz said. “He had the makings of becoming a great athletic director, and I believe that would’ve been his path if he didn’t intern with the Philadelphia Eagles.” Via the Kansas City Star.

Veach got his first taste in the NFL as a intern with the Philadelphia Eagles during Training Camp of the 2004 season.

According to Alec Mcchesney of the Kanasas City Star, Kirk Ciarrocca who was on the Delaware football staff at the time and helped Veach get the internship.

Ciarroca told the Kansas City Star this about Veach: “I knew Brett was special,” Ciarrocca said. “He loved the game and he had such a special personality. Success was written all over him.”

Then in 2007 when Veach was working at Delaware as a supervisor of intercollegiate athletic events, the Blue Hen got a call from the Eagles once again but this time as Andy Reid’s coaching assistant. Veach held that title from 2007 to 2009.

Oravitz told the Kansas City Star about the moment Veach got offered a job with the Eagles:

“I remember he came to me seeking advice on whether or not he should take the job,” said Jerry Oravitz, a co-worker and longtime mentor of Veach. “I, of course, told him to take the job and start tomorrow, even though I am pretty sure tomorrow was a Sunday.

“Brett, being the loyal man he is, stayed with us for the next two weeks as he worked for the Eagles. He was so loyal to us.”

It did not take long for Veach to earn Reid’s trust and take more challenging work at Philadelphia.

“It didn’t take long for Brett to work with Andy before Andy really trusted him with some really important stuff,” said former Delaware football coach K.C. Keeler. “In a short period of time, Brett developed trust on not only a professional level but a personal level with Andy.” 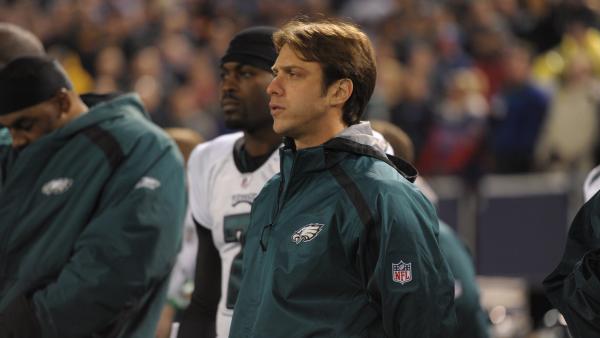 One of those challenges was in 2008, Andy Reid laid on Veach was to go out and search for the best available Wide Receiver in the 2nd round of that year’s draft.

Veach knocked that one out of the park by finding the speedy and elusive Wide Receiver and kick returner DeSean Jackson out of University of California.

While many teams passed on Jackson due his size, the Eagles found their new stud at WR as Jackson went three Pro Bowls during his time at the Eagles.

Keeler told the Kansas City Star that Reid trusted Veach so much that the former Blue Hen tried to get Reid’s youngest son Spencer to Delaware but eventually went to Temple.

In 2010, Veach was promoted by Reid as the Eagles pro and college scout and held that position till he followed Reid to Kansas City in 2013.

Keeler is not surprised someone with Veach’s passion and commucation skills that the former Blue Hen star has made this far.

“He has all the ingredients. This is a passion for him … it’s not a job, but this is a passion,” Keeler said. “He’s such a good person and cares about people. When Andy makes decisions, he doesn’t just judge candidates on one or two criteria. He always looks at the whole package.

“(Brett) brings energy and his ability to communicate with people. Andy was the perfect fit for Brett, that’s why he has climbed the NFL ladder so quickly.” Via Kansas City Star.