The Colonial Athletic Association Mens Basketball Media Day was Wednesday and here is what we learned in terms of the Blue Hens.

The Blue Hens are predicted to finish seventh ( 156pts) in the CAA Preseason Poll. The Hens finished ninth last year in the CAA with a 13-20 record ( 5-13 CAA record).

College of Charleston is picked to win it all in the 2017-18 season with 362 points , according to a vote of head coaches, media relations directors and media members. College of Charleston got all but two first place votes. The two-time CAA defending champs UNCW is predicted to finish fifth with 197 points 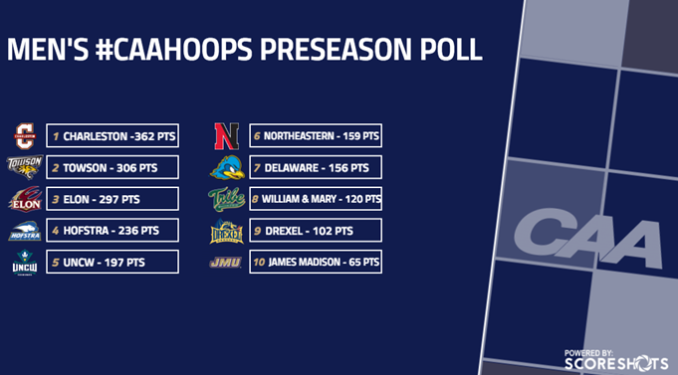 After a mediocre regular season, the Blue Hens battled in the CAA tournament ultimately losing in the quarterfinals to UNCW. The Hens are looking to rebound this year and show a better regular season this year.

The Hens are led by second year coach Martin Ingelsby who became the coach last season who was an assistant coach under another former Blue Hen Head Coach Mike Brey at Notre Dame. The Blue Hens have four returning starters including Ryan Daly and Anthony Mosley.

Four starters return for @delawarembb as we check out some Blue Hens highlights! pic.twitter.com/vyL0W6iwPG

Also, CAA preseason picks sophomore guard Ryan Daly to be on the Preseason All-CAA second team. Daly led all Blue Hens and CAA freshmen with 16 points and 7.4 rebounds per game. The Blue Hen guard ranked sixth in scoring and fifth in rebounding in the CAA for the season.  The sophomore was a scoring machine with scoring double figures in his last 21 out of 23 games and Daly had 11 games where he scored 20 points in a game. Daly also had six double-doubles on the season.

With all this scoring he had the awards and records were calling his name and one of them was breaking Blue Hen freshman single season records in points and rebounds. Daly was named MVP of the Hens and was a CAA five-time recipient of Rookie of the Week during the 2016-2017 season. The Blue Hen guard was also named CAA Rookie of the Year,  All-CAA third team and CAA All-Tournament Team.

Daly told the media in the CAA Media teleconference that he wants to become a more efficient player and focusing on taking better shot selections.